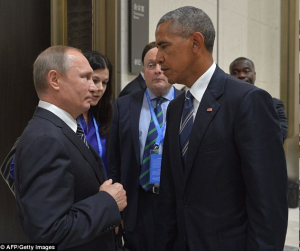 This is Putin & Obama putting on the mad face, a de rigueur posture in diplomatic protocol. It’s a phony version of the constipated mouth thing which expresses more sincere antipathies. We know this mad face routine from Obama’s several meetings with Netanyahu where Obama waits for cameras to go away before he cuts multi-billion dollar checks for military aid to Israel.

This Putin-Obama encounter was last September at the G20 summit in China. But they met again yesterday at the Asia Pacific Economic Cooperation Forum in Lima, Peru. According to media reports, they had a 4-minute conversation about Syria where Russia is on a major missile & bombing campaign but denies it is involved in the murderous bombing siege on 250,000 civilians in Aleppo. Since Russia openly supports the Assad dictatorship whilst the US does so only sub rosa, they probably didn’t think it diplomatically advisable to raise objections to Assad bombing the city. You can cover a lot of small talk in four minutes but not Russian & US military involvement in Syria.

Media continues to talk about the changes in US policy toward Syria heralded by the warm relationship Putin has with Trump. It’s one thing for media to peddle that high school social studies baloney & quite another for political activists to repeat it like the gospel truth. US capitalism is a massive, complicated system with economic, political, & military relationships all over the world & in serious crisis. US policy is not left to presidents of the caliber of Reagan (who suffered dementia half his term), either of the Bush guys (neither of whom could put a coherent thought together), Clinton, (who was a two-bit hustler), or Obama, (who had no experience whatsoever)—nor certainly a narcissistic blowhard like Trump.

US policy is formulated by think tanks, government agencies & officials, special advisory panels, the US Pentagon & CIA officials, advisors like Kissinger (there’s a whole slew of those treacherous creeps), bankers & corporate heads. It would be idiocy to leave US capitalism & its political policies in the hands of Trump & the right-wing nationalists he’s lining up as his cabinet. There isn’t one of them that won’t be approved by those who really run this country.

That’s not cause for jubilation because clearly a dramatic rightward shift is being planned in US politics, here & abroad. But that means active opposition must be organized. Those chiding the anti-Trump protesters should stop the banal criticisms & join the protests.