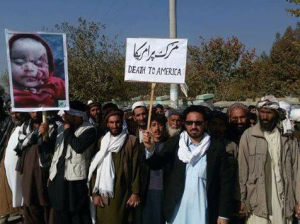 Last Thursday in the northern province of Kunduz, Afghanistan, US bombers in repeated night airstrikes, killed 32 civilians, including women, children, & infants, sleeping in their homes & injured 25 others. Those are the official figures but civilians in Kunduz claim the deaths & injuries are much higher.

The US claimed the airstrikes were to support a joint US & Afghan ground operation hunting down two senior Taliban commanders. Afghan commandos descending from helicopters came under fire & that’s when the US deployed bombers.

They used a similar story in October 2015 when US bombers destroyed a trauma hospital in Kunduz operated by MSF/Doctors Without Borders, killing 42 people & injuring 30 others. MSF said all warring parties were notified of the hospital’s location & that the airstrike was a deliberate war crime. The US military initially said the airstrike was to support US ground troops but later tried to blame the Afghan military.

This is a rare glimpse into the barbaric character of US military operations in Afghanistan–about which there is an almost total news blackout: the bombing of hospitals & residential areas with reckless & racist contempt for human life. That is what Afghans have lived with for over 15 years.

There were protests in Kunduz as outraged & grieving survivors carried the caskets of their beloved to the governor’s office. Some chanted “Death to America” & “Death to President Ghani.”

We stand with the people of Kunduz in condemning the US government for its murderous occupation & countless war crimes against the people of Afghanistan. The greatest political failing of this period is the weakness of international antiwar forces demanding the end of this monstrous war.

US out of Afghanistan.