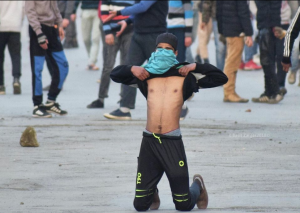 There are protests in Shopian & Srinagar, Kashmir against the Indian army killing of civilians. Some may look at this photo of a young man taunting soldiers to shoot him & see provocation; others may see bravado. Some claim the stone pelters are paid provocateurs or self-destructive. Let it be noted that just in January 2018, the Indian occupying army killed 18 civilians, including a 10-year-old boy & others who were not protesting, injured 147 others, arrested 137, widowed two women & orphaned ten kids by the use of brute force, pellet guns, tear gas shells.

If this is bravado, it is to mask fear & express resistance to occupation. Stand with Kashmiris against occupation so youth can use their vital life energy to create a free society rather than resist brute force.