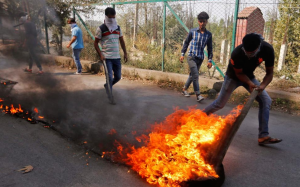 This photo of young protesters in Srinagar yesterday is another case of how media subtly portrays Palestinian & Kashmiri activists as isolated, nihilistic youth. Kashmiris are under siege by the largest occupying army in the world: one soldier to every seven Kashmiris. They are being shot at with live ammo, tear gas & sound grenades, & pellet guns. They’re being arrested in night raids on their homes & detained indefinitely under the Public Safety Act. They can damn well defend themselves by any means necessary. Since youth are specifically targeted in violence & arrests, one can easily understand their fury.

Media hasn’t published photos of protests by journalists, now in the third day, against the closing down of Kashmir Reader & India’s censorship of Kashmiri media. Quite a significant protest, but without social media we wouldn’t even know about it.

The coalition of Kashmiri political groups called for a complete shutdown of businesses until October 13th to protest the occupation. On Friday, October 7th, they’re leading a march in Srinagar protesting India’s campaign to create war hysteria with Pakistan to divert international attention from the barbarous occupation & siege in Kashmir. The same coalition issued a call for people to occupy roads leading to police stations on October 10th to protest police involvement in killing & maiming Kashmiris. We shouldn’t hold our breath wondering if Reuters or Yahoo will publish photos of those massive events.