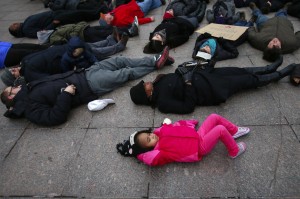 This is 3-year-old Jaidyn Walker from Atlanta at a “die-in” in White Plains, NY just north of NYC in Westchester County. For the second night in a row thousands of protesters are filling the streets & bridges of NYC & cities across the US to protest the decision to let the murderous cop who strangled Eric Garner to death walk free. There were no ambiguities in this case, no confusions about what happened since the murder was videotaped from start to finish. The opacity of the grand jury decision & likely prosecutorial misconduct has not yet been sliced & diced as the Michael Brown grand jury decision to show the arrant racism & social hatred involved.

The question must be asked: has the US ruling class lost its mind? Does it really think it can get away with this forever without a massive countermovement of justice? Does it think the thousands of protests across this country will eventually dissipate & they can go back to shooting unarmed Black teens without consequences?

This is where the media plays such an invaluable role by playing stupid & doing the incredulity thing about cop terrorism in the Black community. Just one case in point (out of many) would be the Judy Woodruff newscast on PBS, the corporate-funded channel that like NPR pretends to intellectualism. Woodruff, a very long-time reporter, asked NY Times reporter David Brooks & some other middle-aged jamoke just how widespread cop violence actually is against unarmed Black teens. The question came after airing extensive footage of protests across the US. The protesters are the ones who would know & who any self-respecting investigative reporter would interview. David Brooks is an effete, privileged, right-winger; a disciple of Milton Friedman; a person who believes humans derive from killer apes; a man who attributes his conservatism to his time as a crime reporter in Chicago; a right-wing Zionist who supported Israel’s Operation Ethnic Cleansing in Gaza & doesn’t recognize the humanity of Palestinians; a man whose home is a suburban villa & lives the yachting life. What the hell would he know? Or should we ask, what the hell does he have to say that’s worth a rat’s ass?

But that is the (let’s be frank) scummy way media tries to cover for police terrorism in the Black community–bringing on reporters that don’t look psycho & so can say the most rancid lies & make them credible.

The main way the voices of justice are heard is in the streets collectively demanding justice by shutting this country down if need be. And the time for “need be” has arrived. We can’t breathe in a society based on social hatred & oppression. Shut it down.