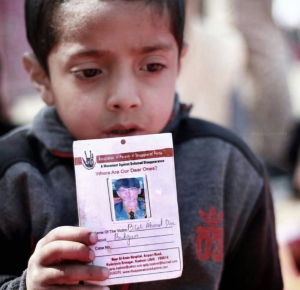 Instead of being at school, this little kid joined his family at the monthly APDP (Association of the parents of Disappeared person) sit-in protest in Srinagar. Ahmad’s uncle Bilal Ahmad Dar from Budgam was abducted & disappeared by the Indian Army during the 90’s.

Indians who think the Kashmiri struggle is an illegal, separatist movement have to make a moral & political choice whether they believe that occupation by 700,000 troops & special forces, impunity for human rights crimes by those troops, forcible disappearance at the rate of one person every day since 1989, mass rape & constant sexual harassment, arbitrary arrest & torture, frisking & harassing civilians going about their daily business, curfews, school closures are how democratic societies deal with those who want to be independent & stand on solid historical, cultural, political, & legal grounds for their claim.