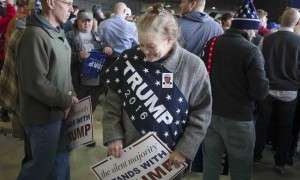 Many polls have been done since Drumpf announced his candidacy in June 2015 about the demographics of his supporters. Polls are tendentious things, highly politicized, & not particularly meaningful as social analysis. Drawing conclusions from them is problematic since they are all done within the parameters of Democratic voters versus Republican voters & both parties have sustained profound crises of confidence among voters for decades.

Articles are emerging now to explain this phenomenon of white working class people supporting a racist dumb-ass xenophobe like Drumpf. Or perhaps it’s more accurate to say, explain away this phenomenon. The primary theme is that these supporters are not racist but are attracted to him because of his views on trade & outsourcing their jobs. Perhaps you have to part of or closer to the working class than the NY Times or the pollsters to know most workers don’t make a distinction between racism & outsourcing since the jobs are going to countries with brown-skinned people. Brown-skinned people who many US workers arrogantly believe are too stupid to do the jobs white male factory workers once exclusively did–because until affirmative action in the 1980s, skilled factory jobs were primarily done by white men. Sweatshops overseas they can live with. But not outsourcing aircraft & turbine engines.

The authoritative voices called on to explain why white working class people support Drumpf include officials from the AFL-CIO, the largest of the two labor federations in a fractured US labor movement. One of its research affiliates did a survey of about 1,700 people in a couple states on the East Coast.

It’s been a mighty long time since the AFL-CIO has had the pulse of where American workers stand on anything because it has its head stuck too far up the Democratic Party’s ass–sharing all of its political vices, particularly xenophobia & opposition to undocumented workers. It operates in several countries as an adjunct to the CIA to foster sweatshop economics & subvert worker’s rights.

The AFL-CIO officials try to put a positive spin on working class support for Drumpf & insist it isn’t racism. It’s racism all right & the same kind that infects the AFL-CIO leadership (which is why they don’t recognize it); the same kind reflected in Obama administration immigration & economic policies; the same kind as European Union officials (who are all highly educated affluents) denying asylum to hundreds of thousands of refugees.

An analysis of the Drumpf phenomenon should not include giving an alibi to white uneducated working class stiffs for their racism which is not distinguished in malignancy from that of their educated affluent counterparts. It’s all of a piece. Crocodile tears for the poor, unschooled, xenophobic workers doesn’t cut it because it patronizes. Women, Black, Latino, or Native American–& now Muslim–workers who’ve experienced the viciousness of white, especially male co-workers harbor no illusions about the massive problems we’re up against & see no compelling reasons to explain it away with pity-mongering workers. Nor certainly to repress our indignation in the interests of some phony working class harmony. Harmony–but not at our expense.

Working people who continue to blame immigrants & refugees for problems created by Wall Street & the White House aren’t lacking advanced degrees since it’s the people with advanced degrees promoting these ideas & policies. What is needed are massive social movements in defense of undocumented workers, refugees, & workers rights everywhere in this world. What is needed is to rebuild the labor movement based on democracy & not on racism, elitism, & autocracy.