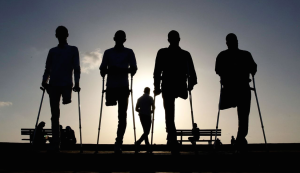 Photojournalist coverage of the freedom struggles in Palestine & Kashmir & of the occupation of Afghanistan are a parody–almost laughable if they weren’t so damn outrageous & millions of human lives weren’t involved: sunsets over Gaza, women’s prayer rituals in Kashmir, balloon selling in Afghanistan. It isn’t necessarily what photojournalists submit but what gets published to fit the editorial stance.

The caption to this Associated Press photo typifies how the Palestinian struggle is misrepresented in media on the rare occasions when it isn’t those damn sunsets over Gaza. It reads: “Four Palestinian friends who were injured during conflicts walk by the sea at Gaza’s small fishing harbor. Fighting left thousands of people with disabilities or no limbs in this Palestinian enclave.”

Isn’t that a beauty!? “Injured during conflicts” & unspecified “fighting.” Were they involved in gang wars? Did they lose their legs in Parkour competitions? Is there a civil war in Gaza? Why won’t the media say outright that thousands of Palestinian children & youth have been permanently disabled & lost limbs as a result of repeated Israeli carpet bombing campaigns over Gaza? Just as the Indian army targets youth in Kashmir with pellet guns to disfigure, blind, & disable them to destroy Kashmiri Intifada.

Disability is a feature of modern war & occupation not just in Kashmir & Gaza but in Afghanistan where thousands have had limbs blown off by land mines planted in the Soviet invasion & from the US-NATO occupation.