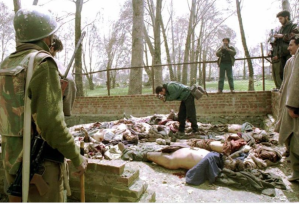 A photographer with the bodies of 22 Kashmiris laying in a police station yard in Srinagar on March 30th, 1996:

It seems unlikely Indian security forces would allow media photographers to document their treatment of the bodies of Kashmiris executed under occupation looking like livestock in a cattle yard, some of them in a state of undress. The desecration & mistreatment of a corpse violates several international laws–albeit laws that are routinely flouted. The photographers here may be part of a forensics operation such as Assad used in his gulag. It’s not certain if he still does since one defected with 28,000 photos of political prisoners tortured, mutilated, hung & killed & laid out naked in this same manner. In discussing torture at Abu Ghraib prison in Iraq, Smita Chakraburtty reminded us of the several torture centers that exist in Kashmir because torture is part of war, occupation, repression, & genocide as much in Kashmir as in Iraq, Syria, Afghanistan, Yemen, Bahrain, Egypt, Burma, Somalia, Libya, Israel.

Stand with Kashmiris in demanding the end of the occupation & self-determination for Kashmir. Our respects to those who died in such a monstrous way. May they Rest In Peace. Any indignity belongs entirely to the Indian army.

(Photo from Inside Kashmir)