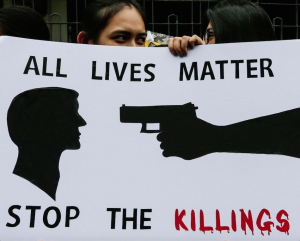 In a speech on Friday, Philippines president Rodrigo Duterte compared himself favorably to Adolph Hitler, saying Hitler massacred millions of Jews & he would be “happy to slaughter” the estimated three million drug addicts in the Philippines.

In fact, since Duterte took office on June 30th, the official death toll is 3,500 suspected drug users & street dealers murdered—half in police operations (according to the Philippines National Police chief) & the rest by vigilante death squads. That’s one-thousand people murdered per month. According to the Philippines National Police, 21,682 drug suspects have been arrested & 729,915 others have surrendered to authorities to avoid summary execution. What will happen to those arrested & those who surrendered since under neoliberal healthcare the government has neither the budget nor infrastructure to address addiction? There are less than 50 accredited treatment & rehab centers in the entire country. Will they remain incarcerated? Or will they be gleefully slaughtered & disappeared?

Duterte ran his election campaign on an anti-illegal drugs platform promising an all-out bloody war to eliminate drug use within six months of taking office. In the campaign he threatened to drown drug suspects in Manila Bay to fatten the fish or to hang them until their heads severed from their bodies because he didn’t want to waste electricity on them.

The criminally psychotic Duterte has not taken kindly to even tepid criticisms of his death squads. When UN officials criticized his methods last August, Duterte criticized UN work in the Philippines & said, “Maybe we’ll just have to decide to separate from the United Nations. If you’re that rude, son of a bitch, we’ll just leave you.” After Duterte compared himself to Hitler, the UN special adviser on the prevention of genocide, Adama Dieng, toned down UN criticism of death squads & told Duterte to “exercise restraint in his use of language that could exacerbate…crimes against humanity.” What’s with the “could” stuff? Duterte publicly incites death squads & boasts about them to the world. His national police chief publicly reports the numbers of those killed, arrested,& who surrendered, albeit more than likely underestimated.

Dieng also expressed alarm about Duterte’s comparison between his campaign to execute three million drug users & Hitler’s genocide against Jews. So did Martin Schaefer, the foreign minister of Germany, who said Duterte’s comment was unacceptable because “It is impossible to make any comparison to the unique atrocities of the Shoah & Holocaust.” No one in their right mind is not absolutely horrified by what Hitler did to six million Jews & millions of others including Roma, disabled, homosexuals, political activists. But only racist Zionism claims that the holocaust of Jews stands unparalleled in the world history of genocides & barbarism. What about the Atlantic slave trade & the colonial savageries in Africa, the Americas, the Middle East, Asia, & elsewhere? Is the holocaust unique because it happened to white people in the metropolitan centers of Europe?

A spokesperson for the US Anti-Defamation League also protested Duterte’s comparison. He said, “The comparison of drug users & dealers to Holocaust victims is inappropriate & deeply offensive.” How does one respond appropriately to such racist insularity & stinking elitism? To such a profound lack of human solidarity & contempt for the poor?

From those Zionists quoted in media so far, only Ronald Lauder, the head of the World Jewish Congress, made a statement that wasn’t completely shameful. He said in part, “Drug abuse is a serious issue. But what President Duterte said is not only profoundly inhumane, but it demonstrates an appalling disrespect for human life that is truly heartbreaking for the democratically elected leader of a great country.” Now if Lauder could just get that straight about Palestinians!

A spokesperson for Human Rights Watch (HRW) made the least compromised statement about Duterte’s pledge to murder three million drug users. HRW called on the US & EU to warn the Philippines that aid could be suspended if the death squads were not stopped. The HRW statement read: “Foreign donors such as the United States & the European Union, which provide technical & financial assistance to the Philippine security forces, particularly the Philippine National Police, urgently need to send a strong message to the Duterte government that it risks an immediate suspension of that aid unless the abusive “war on drugs” & its skyrocketing death toll comes to a halt.”

From that statement we learn the US & EU bankroll Duterte’s police force which claims responsibility for half the murders of poor people suspected of drug use. Who knew!? So does that mean the US can pull the plug on those death squads by stopping all aid to the national police force? We already knew the US gave the Philippines more than $120 million in military aid this year, that the US & Philippines hold annual war game exercises, that the US is negotiating for air & naval bases for its buildup in the South China Sea.

All that would explain the shameful response, or more aptly lack of response from Obama & the US government to Duterte’s death squad campaign. Obama was scheduled to meet with Duterte after the G20 meeting in China in early September, reportedly to raise the issue of extrajudicial killings. Duterte dared Obama to raise the issue & called him the “son of a whore.” In response, Obama called Duterte “a colorful character” & cancelled the meeting. It might not have been a productive meeting with Duterte shooting off his mouth. But if Obama presented Duterte with a financial accounting of US aid to the Philippines, especially to the National Police carrying out Duterte’s dirty work, things might have gone more smoothly.

The response of US State Department officials are as pitiful as those of US Defense Secretary Ashton Carter who said he is “deeply troubled” by Duterte’s words. Just not troubled enough to stop negotiating for those bases & war games or to even threaten to end military aid. There is no report of Obama’s response to Duterte’s comments about Hitler except one media source that he appears to be ‘playing it down’ or as one think tank expert said “taking the long view” in dealing with Duterte.

The so-called long view has been laid out quite clearly by Ashton Carter. Despite Duterte’s recent threats to sever the military relationship with the US, extrajudicial executions will not stand in the way of US military plans & alliance with the Philippines. Duterte is a loose cannon, probably deranged, but he is not in full charge in the Philippines. There is an established oligarchy with vested interests in a US military alliance & in the economic aid they receive from the US, Europe, & elsewhere. The oligarchs might have thought Duterte would be an effective president during the period of re-militarization & to crush opposition to neoliberal economic policies. But they will not allow his genocidal impulses to destroy their economic relationship, partly dependency, on the the IMF, World Bank, US & Europe.

This protest last Friday in Manila against Duterte’s death squads may be the only situation when the slogan “Black Lives Matter” can be coopted to “All lives matter.” Students & faculty from the St. Paul University stood in front of their school to demand an end to the executions. Our fullest solidarity with them & our deepest respect.