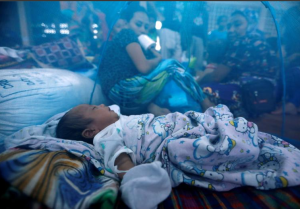 The Philippines air force is now bombing Marawi, a city of 200,000 to 250,000 civilians–ostensibly to take out ISIS-allied forces. According to media, most civilians have fled but thousands remain trapped. Media reports they are fleeing ISIS but if that were the case they would have done so months ago & not waited until the Duterte regime was bombing the city to smithereens.

There should be no mistake about it: this military offensive is part of the international campaign to portray Muslims as terrorists & the US military is involved up to its eyeballs. Assadists support the Duterte regime, claiming Muslim guerrilla fighters in this region are terrorists trying to take down Duterte. If there is any nexus between ISIS & Muslim fighters in Marawi, rest assured it is a result of systematic work by the US military to create that connection.

The photo is an infant among the tens of thousands who have fled Marawi.