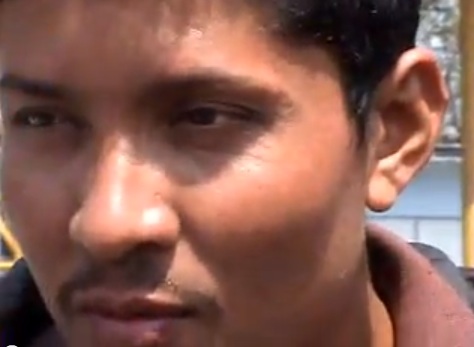 Maybe it’s the dirgeful music in this video that evokes such sadness, maybe it’s actually seeing the danger of hopping on & off moving trains, but it’s more likely seeing these young immigrants from Central America trying to mask their terror & tears as they explain why they’re taking this immensely hazardous trek through Mexico to the US border to find work. They have spouses, children, & other family members dependent for survival on their successfully getting across the border. Thousands of minor children are among those traveling. Their lives are endangered every mile of the way as a result of US & Mexican immigration policies which are nothing less than barbaric & racist as hell.

Immigrants, typically starting their trip in Chiapas, MX, have to hop on & off at least ten or fifteen freight trains during the 1,500 mile trip. The trains are called El tren de la muerte (The train of death) or La Bestia (The Beast) because so many immigrants who fall asleep riding the top are jolted off & lose limbs or are decapitated. The crime statistics are harrowing: 80% will be assaulted or robbed; 60% of the women will be raped; according to Mexico’s human rights commission, thousands will be disappeared in mass kidnappings; hundreds will be found in mass graves & others will never be found.

While the train companies & the Mexican government show such unspeakable & criminal contempt for human life, thousands of poor Mexican families & immigrant & human rights groups provide food, shelter, clothes, medicine, alerts about danger, & emotional support along the way. Many of them may well have family who made the same trip; most just know the full meaning of human respect & solidarity.

This governmental treachery is repeated around the world, affecting the lives & well-being of millions of people. Immigration is a human right! Open the damn borders!

(Photo of 29-year-old Honduran man is from video)