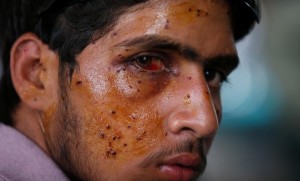 It’s possible the internet lockout in Kashmir has made photojournalist reporting difficult–except that it was barely existent before the current siege. There was coverage of Kashmiri women’s prayer rituals but almost nothing on the Indian occupation. This photo is one of the very few appearing in major media of the current barbarous siege. The young man is sitting (yesterday) inside a hospital in Srinagar waiting to be treated for injuries from pellet munitions.

Pellet guns, which have been used against democracy protesters in Bahrain since 2012, were first used against Kashmiri protesters in 2010. For public relations purposes, they are called non-lethal weapons but they are intended to inflict unbearable & permanent suffering & disability, particularly blindness. And they can be fatal.

One pellet cartridge holds up to 500 tiny iron balls shot at high velocity which explode into innumerable pellets on impact with the human body. If they hit a vital organ, they are fatal.There are frequent reports from Kashmir that Indian soldiers are indiscriminate in use of pellet guns & direct them at the face & upper body precisely to cause blindness & disfigurement. The pellets are difficult, in most cases impossible to remove & remain lodged in the body despite long hours of surgery. Many cause life-threatening infections & permanent pain. A majority of victims are young people, including many children. The use of pellet guns subjects them to a lifetime of unspeakable pain & suffering.

In short, they are a major human rights crime & must be denounced regardless of what one thinks about the Kashmiri claim to self-determination.