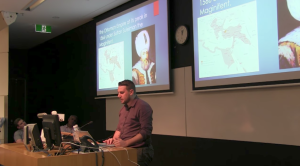 Assadist Tim Anderson just bounced Paul Antonopoulos from the Australian Hands Off Syria Coalition leadership body because he was outed as a Nazi with an active secret life posting outrageously vile & hateful racist comments about Aborigines.

Antonopoulos was a featured speaker at the recent Assadist conference Anderson organized in Sydney. He is also a Stalinist who portrays himself as “anti-imperialist.” After being outed as a Nazi, he was bounced as deputy editor of Al-Masdar News, the Assadist journalistic equivalent of The National Inquirer. Only worse. More like Sputnik News.

Anderson & Leith Abou Fadel, the editor of Al-Masdar News, are going all righteous but neither one of them is a slouch when it comes to ugly racism. It’s their stock-in-trade. It’s who they are politically. The political essence of Assadism is a demented amalgam of Stalinism, anti-Semitism, Islamophobia, libertarianism, fascism. All you have to do to show that is look at the political forces lined up four-square behind Assad & Putin.

If Anderson & Fadel get all carried away with righteousness & start expelling Nazis & fascists, the entire grass roots of the Assadist movement is gone along with every one of the leaders. The only ones left will be the rah-rah chorus of lost souls who don’t know their ass from their elbow. If a movement is built on support for a fascist dictator, the grass roots movement of followers will most likely be comprised of fascists.

Now a question remains: articles & speeches by Antonopoulos have been shared all over social media. He’s heralded by Eva Bartlett, Vanessa Beeley, & countless other Assadists. How will they scoop up all that manure to disassociate at least publicly from his fascism which they secretly share?