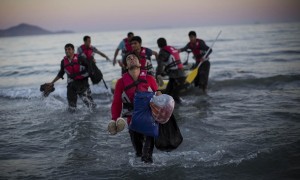 The tsunami of refugees entering Europe through the Greek islands & the barbarism they’re facing as they seek sanctuary take all our attention. But there are patterns within immigration that are important to note. We understand why Syrians, Afghans, Palestinians are fleeing for their lives. Their flight for refuge from war includes entire families–small children to elderly. However one substantial group of refugees is reportedly single men from Pakistan hoping to travel to the UK & Ireland.

It isn’t often noted but Pakistanis have shown up on all the major immigration routes for a long time–including to Australia & through the southern US border via Mexico.

Ireland is attempting legal maneuvers to deport them & it isn’t clear why they would go to Ireland since so many native Irish are emigrating to find work. But then Pakistanis are also fleeing to Afghanistan, a war zone which millions of Afghans fled for Iran & Pakistan. Such are the sarcasms of modern war.

In the past year over 210,000 Pakistanis, including tens of thousands of children, crossed into Afghanistan, mostly from the North Waziristan province where the US has long been drone bombing & the Pakistani military launched its own bombing offensive against the Taliban.

There are many other reasons for Pakistanis to flee, including massive flooding & political conflict in the cities. European authorities don’t have the right to interrogate the reasons why they want asylum. Immigration is a human right.

What this points out more than anything is the imperative of re-building the international antiwar movement to demand the US & its proxy allies stop the bombing, end the occupations, & end the wars turning the Middle East into a killing field.

The photo is Pakistani refugees landing at Kos.