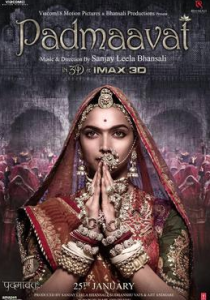 Just returned & am still reeling from seeing the Bollywood film “Padmaavat.” They claim it’s a cinematic rendition of an epic poem written in 1540 by a Sufi poet. How do we describe a film which is, hands down, one of the greatest cinematic monstrosities of all time? How do we tell if this piece of crap failed as parody, melodrama, or as drama? Something fundamental was lost in translation. But not how disastrous a film it is. It combined the worst of Cecil B. DeMille with the over-the-top stuff of Bollywood.

But Bollywood isn’t kidding anyone. This was not based on an epic poem by that Sufi poet. It’s more a case of Hindutva guys meet ISIS. There was no cliché or stereotype about Muslims that was not plumbed to their maximum depth of 0.2 milliliters. A parody about psycho Muslims got played off against a Hindutva supremacist fantasy. If the Hindutva crowd think they got the better against the Muslims, think again. Unless you think stupid & misogyny are flattering concepts. Who will ever forget that dance scene near the end when the psycho Muslim leader & his army did their Bollywood ISIS routine?

My friend Elena Ledesma Rashid who saw the film with me & Beverly Pardue asked the most important question: why was such a film made at this time when Muslims are being killed & persecuted in India & militarily occupied in Kashmir? It might also be asked how such a cinematic catastrophe made its way to the US when it should never have gotten off the cutting room floor? The answer can only be that it is a hating on Muslims thing that took the excesses of Bollywood, the persecution of Muslims in India, the occupation of Kashmir, & the political climate of Islamophobia to pull off. If it was actually intended as propaganda, they’ll have to do a lot better than making a clown show out of Indian history. The scary thing that Beverly pointed out is that many will view this piece of crap (I believe she used more refined language) & not understand that it is all a lie.

(Photo is poster from the film)