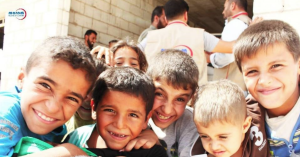 Of the 5.5 million registered Syrian refugees, 50 percent are female & over 51 percent are children under 17 years of age. Of course like Palestinian & Rohingya refugees, many are unregistered with the UN. Census & UN estimates disagree markedly but various sources report that there are at least 3.5 million Syrians living in refugee camps in Turkey, over 2 million in Lebanon, over a million in Jordan, 500,000 to 2,500,000 in Saudi Arabia, over a million in other Arab countries, & at least a million in Europe.

Much of the political accounting for the betrayals of the Syrian Arab Spring uprising will come from the refugees & the children growing up in refugee camps, as we have seen with the Palestinian struggle. In that regard, it is of note that Syrian bombers & artillery are today laying siege to Yarmouk, the Palestinian refugee camp south of Damascus. They are doing so, of course, under the guise of taking out “jihadis” holed up in the camps.