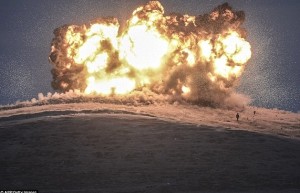 While we’re on our way to Armageddon in Syria & Iraq–turning the entire Middle East into a killing field–we ought to be able to make sense out of what is happening. But there isn’t one damn part of the story that stands up to interrogation–beginning with why Russia, Syria, & a US-led alliance of 13 nations are carrying out airstrikes & 29 other nations are engaged against ISIS on the ground.

We’ll begin with the obvious question: who the hell is ISIS? And how did they grow within months from a minor paramilitary operation into a force big enough to stand off 44 militaries? How did they get ahold of those oil fields? Who’s selling them armaments & heavy war equipment & how are they delivering it? According to the US, in July of this year ISIS had 31,000 fighters. If such a relatively small military force without fighter planes can hold off all that military might, conquer & hold all that territory, what are those 44 militaries doing wrong? What are they doing that ISIS continues to recruit, prosper, & gain territory with all that firepower directed at it?

US government analysts claimed ISIS rakes in $50 million a month from oil smuggling operations. Thirteen nations flying bombers over the region couldn’t take out that operation in a fortnight? Last month Russian bombers took out 500 oil tankers in just a few days. Is that what prompted US bombers to take out 280 of them a week later? If oil is what is bankrolling ISIS, then why was that operation allowed to go on for months? Or is it years now?

But the plot sickens: ISIS is delivering the oil to Turkey. Are they moving all those tankers through Syria & Iraq & past Turkish border patrols undetected? In a pig’s eye! Turkey, a US ally, is playing a dirty game here & the people of Syria & Iraq are paying the price of that treachery. The Pentagon doesn’t know this? Why don’t they google it & get the public information like the rest of us?

Once Russia took out those 500 oil tankers, it will be hard to sustain the narrative of ISIS surviving off oil smuggling. So now there’s a new dimension to the story: ISIS is surviving off drug trafficking & money laundering. ISIS has sophisticated telecommunications & an active social media presence but do they have banks now too? Are they actually now competing with CIA drug-smuggling operations? No wonder the US is bombing them. That narrative would make a lot more sense than the present one.

Finally, who is fighting who over there? Where is the Assad regime in all this? What about all those rebel groups like the Kurds & Free Syrian Army? At last count there were eight of them. What about the Taliban & al-Qaeda & the other “terrorist” groups? Who’s playing ball with who?

But there is one last question: ISIS has earned the world’s hatred & condemnation because of such practices as beheading people. Now we learned just last week that Saudi Arabia, a respected member of the US-led coalition against ISIS, has beheaded 151 people already this year & plans to behead at least 50 a day henceforward.

So here we are, headed to Armageddon, putting at peril the lives of millions of people in the Middle East, & there isn’t a single part of the story that makes a shred of sense. That’s because lying is the language of war & because those with bombers think they can do anything they please with impunity. They have their reasons for the treachery but our job is not so much to unravel all that as to stand publicly & oppose it.

The most imperative political task of our era remains: rebuild the international antiwar movement & stand steadfast against these monstrous wars.

(Photo is somebody bombing something in Syria under the guise of bombing ISIS; by AFP/Getty Images)