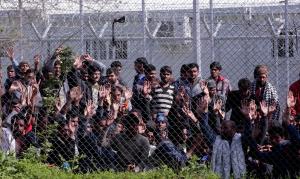 On October 4th & 5th, an international donor summit of 70 countries met in Brussels to work out financial assistance to Afghanistan. Over the next four years, they pledged US$15.2 billion; of that, the EU & its member states pledged US$5.6 billion (€5 billion).

After a year of secret negotiations, EU officials muscled the Afghan government into signing the EU-Afghanistan Joint Way Forward on Migration agreement at the donor conference. This vile agreement demands Afghanistan accept an unlimited number of Afghan refugees denied asylum & forcibly deported from Europe in exchange for the financial assistance package. Last year, over 196,000 Afghans applied for asylum in the EU; so far this year, 128,000 have filed applications. Many Afghans did not apply & live in the shadows as undocumented refugees.

This unsavory, ruthless agreement follows the EU deal last March which awarded Turkey US$6.6 billion (€6 billion) & visa liberalization to Turks in exchange for accepting deported Syrian & other asylum seekers. The Afghan elite also derive an incentive package in the EU-Afghan agreement, including special scholarships to students & researchers at European universities.

The US-NATO war & occupation of Afghanistan have devastated the country. As of August 2016, the UNHCR estimated there were 1.2 million people internally displaced by the war. Pakistan has been working with UNHCR for a few years to deport Afghan refugees living there & plans to deport all of the estimated 3 million living there, many since 1978.

If the country were in any kind of condition to accept hundreds of thousands of deported refugees, there would be no need for a multi-billion dollar aid package. But as soon as the agreement was signed on October 4th, the EU had everything in place to start deporting immediately.

The most detestable thing of all is that the US & NATO countries still have 13,000 troops in Afghanistan, unspecified numbers of mercenaries & CIA operatives, & the US is still conducting daily bombing sorties over parts of the country. Thousands of civilians continue to be killed, maimed by land mines, displaced by bombing.

It is one of the historic failings of the international antiwar movement that it has not been able to stay the hand of US-NATO military aggression in Afghanistan. Our deepest regrets & fullest solidarity with the people of Afghanistan who have paid such a price for political disunity.