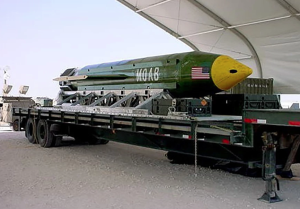 The Taliban has taken responsibility for a suicide bomb attack in Kabul, Afghanistan. They loaded up an ambulance with explosives, drove it past military checkpoints into an area of government offices, & detonated it. The US government denounced the “inhumane disregard for human life.” It sure as hell is ruthless & inhumane. But the question remains: who is providing arms & explosives to the Taliban (& now ISIS) that they can carry on war for over 16 years against one of the most high-tech militaries in the world? Hasn’t the US satellite surveillance system been able to trace how weapons are getting into the hands of Taliban & ISIS fighters so they can cut off the supply route?

But there’s another question: was the “inhumane disregard for human life” worse than over 16 years of US-coalition occupation & bombing? Was it more inhumane than when the US dropped the 22,000 pound Mother Of All Bombs (MOAB)–the largest non-nuclear bomb in its arsenal–on Afghanistan last April? Because Afghan lives are only “collateral damage” to the US Pentagon, there was no report on the number of civilians who were killed.

There’s a news blackout about the US-coalition war on Afghanistan. But we cannot cease demanding the immediate, unconditional withdrawal of all US-coalition forces from Afghanistan. We cannot let it become the forgotten war. Afghans are out brothers & sisters & our taxes are paying for those bombs.

US-coalition out of Afghanistan now!

(Photo is MOAB dropped on Afghans in April 2017)