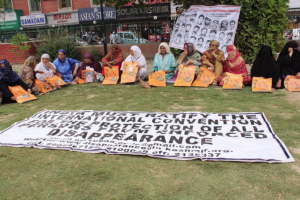 Protest in Kashmir against forcible disappearance of mostly men & boys:

Among the most unspeakable crimes committed against humanity is forcible disappearance by repressive regimes. Hundreds of thousands have been disappeared in at least 50 different countries. It is a monstrous crime because the grief can never be resolved. In Kashmir, an estimated 10,000 men & boys have been disappeared since 1989. That is almost one person every day for 28 years.

Kashmiri activists, particularly the Jammu Kashmir Coalition of Civil Society (JKCCS) led by Khurram Parvez & Parvez Imroz, & the Association of Parents of Disappeared Persons (APDP) led by Parveena Ahangar, are playing a central role in exposing & opposing this crime not just in Kashmir but internationally through the Asian Federation Against Involuntary Disappearances (AFAD) led by Khurram Parvez.