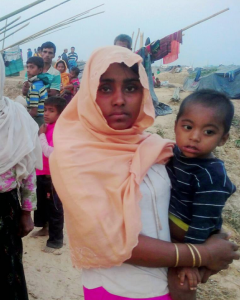 Myanmar Military’s Brutality on the Rohingya.

Recently in Arakan, the Myanmar government continued its incredible atrocities — arson, rape, arbitrary arrest and mass killing of the Rohingya. Not even women and children are left.

Noor Begum, a 30-year-old Rohingya widow, took shelter in the Kutupalong makeshift refugee camp with her three-year-old baby. She fled from Myanmar to Bangladesh one week ago. Her husband Anis Ullah (35) was dragged away by the Myanmar army and killed in the paddy field. She herself was beaten until unconscious. Her house was looted. She found herself in Bangladesh without food and clothes. “As a mother, it breaks my heart when my baby cries for his father and for food and I am unable to afford food,” she said. “In this unbearably cold winter, we have had to stay under the open sky without a blanket.”

The Myanmar military started to crack down intensively on the Rohingya minority again after some miscreants attacked a police post where nine policemen were killed. According to human rights organizations, the Rohingya are one of most persecuted minorities in the world. Despite the fact that the Rohingya have lived in Myanmar for years and years, the government does not acknowledge them as citizens.

(Photo is Noor Begum & her baby)