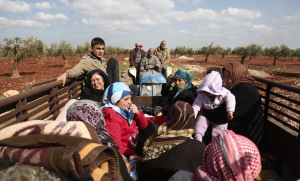 Syria is extremely complicated militarily because of the nearly 70 militaries involved plus an estimated thousand-plus paramilitary groups, including ISIS & al-Qaeda. You don’t have to be a military strategist to take a position but you do need to be scholarly if you want to understand it. Scholarly does not mean rounding up all the media articles about the conflict & going with the preponderance of opinion. That is becoming way too evident in commentary on the role of Kurdish forces in the conflict & on Turkish military intervention in Afrin against the Kurds.

Turkey has the second largest military within NATO & is no ally of the revolution against Assad. It may appear to operate at cross-purposes to the US, but it is part of the US counterrevolutionary coalition, including allowing the US to use its airbases for sorties into Syria. Turkey has been bombing Afrin, a Kurdish stronghold in northern Syria, for over two months & announced yesterday that the city is now under Turkish control. The Kurds, or at least a section of them, have been collaborating with the US coalition, both in Mosul & Raqqa in the ostensible fight against ISIS which involves carpet bombing of civilians. The Guardian newspaper has been publishing articles portraying the Kurds in Afrin as democratic, even socialist, with ethnic & female equality, ecologically advanced, & as LGBT-friendly. Drawing from other media sources, there are commentators who portray the Kurds as Stalinists & as American stooges.

The complexity & duration of the Kurdish struggle for self-determination deserves more respect than such ‘analyses’ are serving up. There are up to 45 million Kurds who live in Kurdistan in the border regions of Turkey, Iraq, Syria, Iran, Armenia. To understand their struggle, one would have to do a scholarly study of who they are, when their marginalization & persecution arose, what their demands as a people are, their relationship to regimes in Turkey, Iraq, et al, the character of their political leadership, why they got involved with the US in the war against ISIS, why they called on Assad to protect them against Turkey. Collaborating with the US in Syria & Iraq out of political expedience speaks to the character of their political leadership & in no way invalidates Kurdish grievances or their just demands for self-determination.

Most people don’t have the time for the scholarship required to understand the Kurdish struggle. Since every scholar comes with a point of view, one has to weed through volumes of tendentious rubbish to understand any complex political issue. But that doesn’t mean we can go lazy & just accept what the Guardian or NY Times say as if it were the gospel truth. Or that we accept what influential commentators say based on media reports combined with their prejudices & impressions.

Without doing that scholarship, we need to hold the glorifications & vilifications. We stand on solid ground by supporting the Kurdish struggle for self-determination without compromise or equivocation; by opposing the collaboration of some Kurds with the US coalition & now with the Assad regime in Afrin; & by steadfastly opposing the bombing of Afrin by the Turkish military. Self-determination for the Kurdish people is linked inextricably with the Syrian revolution against Assad.