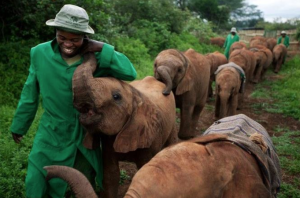 Elephants are deeply emotional & loving animals who form intense bonds of love with each other. They grieve & bury their dead & return to the grave sites just as humans do. Because of poaching & safari hunting, elephants are now listed as endangered & thousands of elephants have been orphaned. Several reserves & orphanages have been set up to care for them, the most famous being the Sheldrick orphanage near Nairobi, Kenya. The trauma of loss is so profound to the elephant that the bond between caretakers & the baby elephants becomes intense. The caretakers actually sleep with the babies so they will survive. After the elephants come of age & leave the reserve, they often come back from the wild to show former caretakers their offspring. According to the caretakers, the love goes both ways. One caretaker said, “It’s not for the wages. The more you’re with them, the more you satisfy yourself. You just love them.” That love is more than evident here as the caretakers at Sheldrick take the elephants out to stroll.

Now consider that Trump has reversed a US ban so that poachers & safari hunters like his two nimrod sons can import trophies of elephants killed without being prosecuted. The photo below is Trump, Jr. holding up the tail & standing over the corpse of an elephant he killed on a safari in 2012. If the Mueller commission does its job right, the creep will end up in the penitentiary for his other crimes. 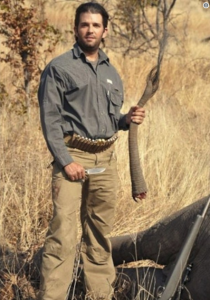