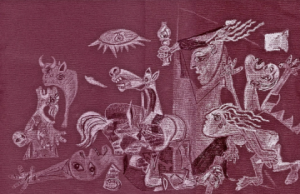 On the issue of what, & more importantly, who defines genocide, by Kashmiri Mohamad Junaid: https://pulsemedia.org/2012/01/17/on-the-precision-of-language-why-the-term-genocide-is-so-wrong-or-who-can-use-the-term/

Theory is not conjuring up abstract, impenetrable ideas in scholarly isolation. The best theoretics derive from struggle, from those directly involved & forced to unravel & address the complexities of social & political reality, especially those confronting war, occupation, persecution, genocide & the ideologies used to justify them like Hindutva nationalism, Islamophobia, Zionism, white supremacy, anti-Semitism, fascism. The purpose is to understand what the hell is going on among contending & duplicitous forces, what should & can be done about it, what are the best political methods to use, & what demands should be raised.

This theoretical work by Kashmiri Mohamad Junaid is probably one of the most important on the issue of genocide. Although it was written for a discussion in 2012, it was just introduced to me by Mir Laieeq who wrote: “call it whatever you want, genocide is a genocide is a genocide, & that is what Indian solution to Kashmiri demand for azadi is, nothing less.” My response to Mir was that using the term genocide for Kashmir was too expansive & weakened the power of the term in regard to the Rohingya struggle, Rwanda, or Bosnia. He sent me this piece by Junaid in response. What blew me away is that it cuts through all the equivocations, deceits, legal quibbling, & toying with language on the issue of what defines genocide, but most importantly, who defines genocide: not legal scholars with vested interests in obscurantism but the oppressed themselves.

There could be no clearer instance of genocide than Burma against the Rohingya people. Yet international human rights experts, especially those associated with the UN, pull their punches by saying it ‘has all the features of ethnic cleansing’ but will not come right out & denounce it as such & refuse the term genocide because that would raise a demand for action to stop it–like sanctions against the Burmese government. The mutterings of international law on genocide aren’t working for the oppressed.

It’s no coincidence that this theoretical work comes from a Kashmiri & that it corresponds to the theoretical work of Rohingya activists & supporters. It is essential to develop theory if one is to be effective in practice. There are no arbitrary, elitist distinctions between the formulation of theory & the practice of emancipatory politics.