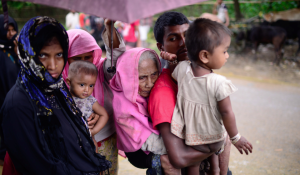 Human Rights Watch (HRW) is an establishment human rights monitor. It doesn’t accept money from governments but it certainly has connections to power & it has distinct conservative politics. This makes its work a mixed bag. On the one hand, it provides investigations & authority to charges of human rights crimes; on the other hand, it doesn’t outright oppose militarism in all its forms & this failing often proves deadly. It means in Afghanistan, Iraq, Syria, Yemen, & elsewhere it won’t take a stand opposing war but only insists it be conducted according to international law. How do you bomb civilian populations with even an ounce of legitimacy under any kind of law?

This weakness in HRW’s politics is more than manifest in its several public statements about what they call the ethnic cleansing of Rohingya in Burma. It may to some degree explain the corruption of a guy like David Scott Mathieson who went from being a researcher on Burma for HRW (2006 to 2016) to an “independent analyst” in Yangon croaking for his supper by writing apologetics for Suu Kyi in the NY Times. In his article of January 17th, 2017 titled “The Lady & the Rohingya” he shows the same masterful grasp of equivocation as HRW. He also shows what a dirt-ball he is by making this statement: “Crude misinformation is disseminated at a prodigious rate by members of the Rohingya diaspora outside Myanmar, especially via the widely discredited websites Rohingya Blogger & Rohingya Vision.” That’s how you know he’s croaking for remunerations. So while Mathieson claims Suu Kyi is only “obtuse” in her justifications for genocide, Rohingya activists who do brilliant exposures of genocide are discredited. It’s a slippery slope from equivocation to collusion.

In their latest statement titled “Burma is Playing Politics with the Dead: Alleged Atrocities Need International Inquiry,” HRW takes up claims by the Burmese junta that ARSA–or as Burmese army officials put it, “extremist Bengali terrorists”–are engaged in mass executions of Hindus in Arakan state. It’s political child’s play to rebut claims that Rohingya are involved in genocide against Hindus when they’re fleeing from military & nationalist death squads. The only people who believe that kind of crap are deranged by nationalist, racist, & fascist loyalties.

So why did HRW go on to repeat their mantra that “While ARSA did attack over two dozen police outposts & an army base in late August–which sparked a Burmese military campaign of ethnic cleansing against the Rohingya population, forcing more than 400,000 people to flee to neighboring Bangladesh–no one has been able to independently verify the Burmese government’s most recent allegations”? See the problems with equivocation? Not only has no one been able to verify that Rohingya are executing Hindus but no one has been able to verify that ARSA attacked 24 police stations & an army base. That comes from the Burmese military which lies through its ass. But the worst part of this equivocation is that it more than blames ARSA for the genocidal onslaught when the junta organized it months in advance, when it was a continuation of what has gone on in Arakan state for years. Is there no place in HRW’s politics for Rohingya self-defense against genocide?

Photo is 25-year-old Kamal Hossain with his family, including his 105-year-old grandmother who he carried on his back to Bangladesh.