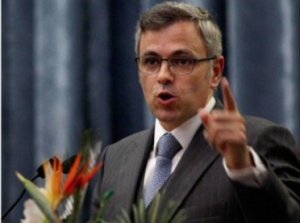 Omar Abdullah was the Chief Minister of Jammu & Kashmir for the Indian government between 2009 & 2015. He’s the thug who authorized the use of pellet guns against unarmed protesters in 2010. He has previously spoken at universities in the US & yesterday was invited by the Institute of International Studies & Institute for South Asia Studies to speak at the University of California, Berkeley on “The Path Forward in Kashmir.” He probably expected to be treated like an éminence grise but our man was met by Kashmiri protesters chanting “we will take you to international criminal court” & “you’re a war-criminal.”

This is his mug shot. If he shows up on your campus, greet him with the same disrespect he got from protesters at Berkeley.

(Photo from With Kashmir)