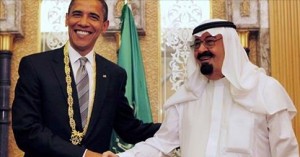 This isn’t the feudal king of Saudi Arabia (SA) with Obama but one of the princes or a minion of some sort. The two jamokes have so much in common–like criminal responsibility for the 6-month bombing siege of Yemen–taking out schools, hospitals, homes, refugee camps with cluster bombs supplied by the Pentagon.

The US State Department welcomes the news that SA was chosen to head up a UN human rights panel. Of course they do. That will make sure the Saudis have Obama’s back in the UN against charges of war crimes–like the atrocities just exposed by Green Berets in Afghanistan–or for supplying the arsenal to Israel for carpet bombing of Gaza.

Why should it concern the Obama regime that 20 year-old Saudi Ali Mohammed al-Nimr was arrested on questionable grounds, held without counsel, tortured, & now will be killed by crucifixion just because his uncle is a Saudi political dissident? What’s the problem!? It’s just another day at Guantanamo or Bagram or any of the other CIA torture centers.

The one good thing you can say about Obama is that he has a flashy smile. But behind it is a man who, to feather his own nest, is willing to front for practices not distinguished from those of feudal barbarism. The CIA doesn’t use crucifixion in its torture chambers; it has waterboarding, sexual torture & humiliation, noise machines, sleep deprivation. The State Department probably thinks it can learn a thing or two from the Saudis; that crucifixion thing might come in handy.

Neoliberalism, the barbaric phase of capitalism, has met its match in feudalism, & is taking humanity backwards. Humanity has to defy this by re-building the international antiwar movement. No historic task is more imperative.

Immediately we need to put pressure on Saudi embassies & the US State Department to stop the crucifixion of al-Nimr & release him to his family.