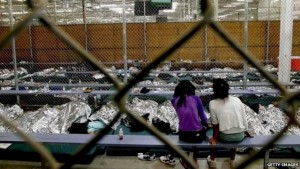 It’s easy to be confused by Obama’s immigration policies because he talks out of both sides of his ass. That’s the politician’s way & why the rule of thumb in politics is always “the deed before the word.”

We can put aside the largesse offered to undocumented youth of deferred amnesty since Obama made it conditional, made no commitment to amnesty, & then let a federal court overrule his executive order. So now the government has the names & addresses of undocumented youth & knows just where to pick them up–along with their undocumented family members.

Deportations of the undocumented increased dramatically under his regime, dwarfing all previous regimes, including Bush. That’s an ignominy & one that forced thousands of children into the US foster care system which is already in a shambles & a disgrace to child welfare.

According to immigration officials, between 7,000 & 8,000 unaccompanied children were taken in by the US Department of Health & Human Services every year after being detained crossing the border. In 2014, that figure was 70,000 unaccompanied children–& 60,000 more with one or more parents. There weren’t enough facilities to house the children & process them to reunite them with families already here or provide families to take them in. In one instance federal officials put children in an abandoned air force base in Texas. Mostly they were stuck in prisons without beds or minimal sanitary conditions.

On July 24th, a federal court chastised the Obama regime for this & ordered the release of 1,700 children from three facilities in the next 90 days. There are so many problems with this ruling. Of course they should be released from squalid prisons where they should not have been put in the first place. But then what!? You can’t just release children to the streets. They have to be provided for. If there are no provisions in the ruling for social workers, families to live with, officials to process their papers & reunite them with families, the Obama regime will simply deport them.

Which brings us to the next problem. What happened to the other nearly 68,000 kids detained by border patrol last year? Were they let go to find their way in life, simply putting small children on the street to be preyed on? Were they deported? Are there other prisons for kids not covered by the federal ruling? You don’t just disappear 68,000 kids without an explanation.

Not long ago, a couple of Texas politicians proposed deporting the children & publicly suggested the kids were operatives in drug trafficking & prostitution. One was a Democrat & the other a Republican. So much for that lesser-evil crap.

Immigration is a human right. Open the borders. Provide sanctuary & support to undocumented children. Enough with the neoliberal barbarism of the Obama regime!

Photo is detention facility for children in Texas.