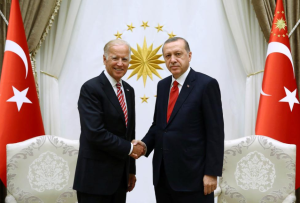 Let it never be said the Obama administration let massive repression stand in the way of collaboration with a dictator. Here US vice president Biden has an affable encounter with Turkish president Erdogan in Ankara.

Since the July 15th attempted coup, Erdogan has incarcerated over 40,000 people in his gulag, fired over 80,000, including nearly 22,000 teachers, & put the country on lockdown.

Critics of Erdogan who state the obvious say he is using the coup attempt as a pretext to crackdown on dissent. It would be hard to find a period under his rule as prime minister & president when that wasn’t the case.

Media reports Biden was silent during his visit about Erdogan’s brutal repression being carried out as they exchanged convivialities. He said Erdogan officials convinced him by simple assertion that they would adhere to constitutional principles & that the rule of law would prevail. “Let’s give them some time,” Biden said. “I believe they mean what they say. And so let’s move on.”

Of course, who is the US to preach morality to dictators?