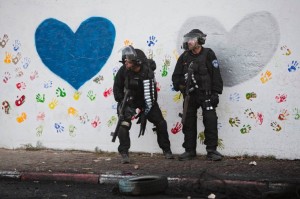 This scene is from Ar’ara, described as an Arab Israeli town in northern Israel. Check out the arsenal those soldiers are packing against unarmed Palestinian protesters. There is no news coverage about Palestinian protests within Israel except this photo & another showing a protester being arrested. Zionist mythology claims Palestinians within Israel have civil rights & as we can see from this photo, they use the military to make damn sure Palestinians don’t exercise them.

Ar’ara is a contentious region because of its concentration of Palestinian towns & its proximity to the border between Israel & Palestinian bantustates. After the establishment of Israel in 1947, the government began confiscating Palestinian land in Ar’ara without notifying the owner. In 1954 an Israeli court ruled that Israeli law (which they were likely extemporizing on the spot) did not require the owner to be notified & excluded even the possibility land owners could contest confiscations in court. So all that mythology about civil rights for Palestinians in Israel is nothing but hogwash & hasbara.