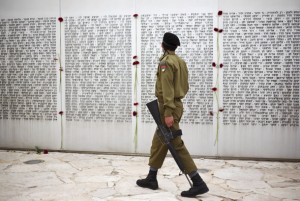 The NY Times caption to this photo read: “An Israeli soldier at a memorial for members of the Armored Corps in Latrun. Wednesday was Memorial Day in Israel, as the country mourned the 23,320 fighters whom it counts as fallen in conflicts since 1860.”

How did they ever think they could get that big fat lie, which comes out of the Israeli government, past an informed readership? Israel has only existed as a state since 1948 when Zionist paramilitary death squads invaded Palestine. The Israeli military was formed out of those death squads in 1948, not 1860.

Who knows why the Israeli government uses that 1860 date other than as part of inventing a history for a fabricated people? There isn’t much available information about it since it’s so obviously goofy. Theodor Herzl, the Hungarian guy who thought up political Zionism, wasn’t even born until 1860 & the decision to forcibly colonize Palestine wasn’t made till the first Zionist Congress in 1897.

One Zionist source, grasping at straws to explain that 1860 thing, says, “A total of 23,320 men & women have been killed defending the land of Israel since 1860, the year that the first Jewish settlers left the secure walls of Jerusalem to build new neighborhoods.” Why in the hell did they leave secure walls to build settlements? Did they militarily force Palestinians off their lands or just move to a new area? Or is that just another fabrication since Jewish colonialism doesn’t show up in the history books for that period?

The figure of 23,320 comes from several Israeli government sources & includes 6,373 killed in the so-called “War of Independence” in 1948–what Palestinians call the Naqba, (“catastrophe”) when 700,000 fled in terror or were forcibly expelled by those death squads. It also includes 9,967 killed between 1860 & the present in “terrorist attacks.” For death squads, resistance to colonialism is termed terrorism.

There aren’t any reliable figures on Palestinian losses but they don’t need to go back to the fictitious date of 1860. Some sources estimate Palestinian fatalities as high as 2 million since 1948 & 7 million now living as refugees. Two million may be too high but in the Naqba itself, at least 20,000 Palestinians were killed & there have been numerous Israeli massacres since at refugee camps as well as recent bombing sieges over Gaza which have killed thousands of people.

The NY Times knows all that; they don’t have a fact-checker problem. They have a political problem.

Cut through the propaganda. Build & honor the economic, cultural, & academic boycott of Israel. Buy nothing with barcode beginning 729.