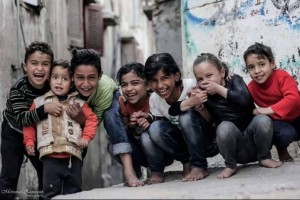 Today we start listing all out goals for 2016, most of which those with good sense will abandon by February 1st. Those ‘of a certain age’ don’t bother with that ritual anymore. It only creates guilt which is a counterproductive emotion. Save guilt for a real transgression–like getting into a wrangle on FB. Who cares if we don’t lose weight or get rid of flab? Who wants to look like Twiggy anyway?

There is one resolution we should be steadfast with however because it draws on the highest aspirations of human beings: rebuild the international antiwar movement in solidarity with the peoples of Afghanistan, Iraq, Syria & build the solidarity movements against occupation & ethnic cleansing in Palestine, Kashmir, Myanmar, & against indigenous peoples on every continent being dispossessed by multinational mining & agribusiness operations. The future they are forging is ours. What’s a little extra flesh compared to that?

These little ones are living in a Palestinian refugee camp. Their need is our New Year priority: honor & build the economic, cultural, & academic boycott of apartheid Israel (BDS). Buy no products made in Israel (barcode beginning 729). Couldn’t be an easier resolution to keep. Couldn’t be more important.

(Photo is from album on wall of Hassan M Shoaap)