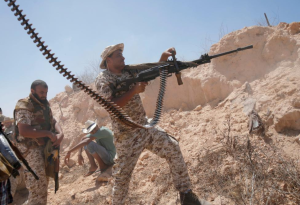 There are some who hold up the 2011 US-NATO war in Libya as a model for what the US should do in Syria. They wed their opposition to Assad’s dictatorship to a military solution. Some fools suggest the US bomb Assad out of power; some suggest Turkey or Saudi Arabia. Some hope for a coalition of those forces. Then there are those who support Russian bombing in support of Assad. You can’t reason with such idiocy.

The US is already conducting several wars. Turkey has its hands full with massive repression & martial law & its own involvement in Syria. Saudi Arabia is still bombing Yemen to smithereens. Russia, Israel, & the US are now collaborating in Syria. If one doesn’t see the possibilities for Armageddon in all that you are blinded by militarism & detached from the carnage & killing fields it creates.

The massive bombing of Libya is what occasioned Hillary Clinton to quip “We came, we saw, he died” about the murder of Qaddafi whose corpse was publicly displayed, abused, & sodomized. Regardless of the politics of Qaddafi, civilized people do not engage in or justify such barbarisms. It is in fact a crime. But that’s the character of US militarism which numbskulls propose as a salvation army in Syria.

After nearly six years, Libya is now in a state of shambles, with two governments & ISIS forces entrenched. Now the US is again heavily involved in Libya & has plans for new bombing campaigns to take out ISIS. This is a photo of a Libyan soldier allied with the “UN-backed government” reportedly firing at ISIS fighters. Is this your model for freedom from tyranny or is it a prescription for killing fields?

There is no military solution in Syria, Libya, Iraq, or anywhere else. The historic imperative is to rebuild the international antiwar movement to compel these armies & bombers to cease operations & allow the peoples of those countries to settle their own affairs without foreign intervention that makes their lives a living hell.