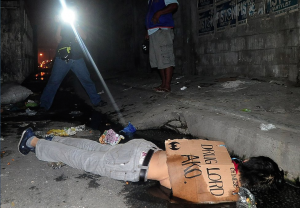 There is every reason to be alarmed by the inauguration of Rodrigo Duterte as the new president of the Philippines. Duterte, now 70-years-old, was the iron-fisted mayor of Davao city for 22 years. It’s quite clear he was enlisted by politicians & businessmen at the highest levels of Filipino power to become president–most likely because they face resistance to the imposition of neoliberal policies & to the re-militarization of the country as part of the US military buildup in the Asia-Pacific region. Their choice of Duterte, nicknamed “Duterte Harry,” indicates they intend to use repression against those who oppose their policies.

Beginning in the mid-1990s as the mayor of Davao, Duterte became associated with the Davao Death Squad (DDS), a vigilante group that summarily executed or disappeared hundreds of people suspected of petty crimes (like theft or cell phone snatching), those suspected as drug dealers or addicts, or street children in a country with 1.5 million homeless children.

The total number killed in Davao between 1998 & 2015 is estimated at 1,424 people. Fifty-percent of them were children under of the age of 17 or young adults, male & female. Most of them were murdered in urban poor areas. Most of the victims were unarmed & shot in cold blood. There wasn’t a single drug lord reported among those murdered.

Duterte was elected on a law & order platform vowing a vigilante crusade against drug dealers, rapists, murderers, & journalists. The country is already one of the most dangerous in the world for journalists with 174 murdered in the last 30 years. Duterte incited against freedom of the press & against journalists by saying in a press conference, “Just because you’re a journalist you are not exempted from assassination if you’re a son of a bitch,” & “Most of those killed, to be frank, have done something. You won’t be killed if you don’t do anything wrong.”

Duterte also warned drug addicts that “If you’re into drugs, I’m sorry. I’ll have to apologize to your family because you’ll surely get killed.” He has congratulated police who execute drug users & offered them bounties to do so. Drug use is a social & a health problem, not a crime. What Duterte is doing is modeling the US war on drug policies that led to summary execution of hundreds of Black youth, the incarceration of thousands, & martial law in the Black community.

Since his election, dead bodies of suspected drug dealers & users have turned up across the Philippines–some executed by police & some by vigilantes who dump the bodies on public streets. Handwritten warning signs are left on some of the bodies. Estimates are that one person has been shot dead every day since the May 9th election of Duterte–shot dead at his incitement & with complete impunity.

In the grand scale of things, shooting down drug addicts & journalists is only the prelude to the massive use of violent repression against the urban poor being forcibly evicted from slums, against homeless children, & against all who speak out or protest neoliberal policies & the militarization of the Philippines.

The photo is the dead body of a “suspected drug dealer” in Manila with a warning sign on his body saying “Chinese drug lord.”

Our fullest solidarity with the political movements in the Philippines because they have a huge battle for democratic rights on their hands.