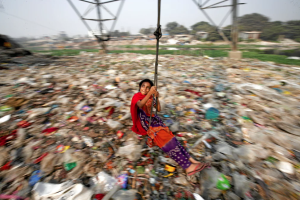 This photo is making media rounds today with the simple caption: “A girl plays on a swing in Dhaka, Bangladesh.”

Such a casual disregard for a little girl in flip-flops swinging over a landfill site bespeaks a serious cognitive disorder usually understood as racism. Are swings in any country usually built next to landfill sites? Is this little girl one of those millions around the world forced to scavenge through stinking, toxic piles of rotting food, dead animals, medical waste, toxic metals from electronics, dirty diapers, animal poop to find recyclables to sell?

If she’s a scavenger, why is she in flip-flops without any protective clothing? The child is vulnerable for respiratory disease, skin infections, several long-term health problems just from living near the site, let alone scavenging it. Maybe Dhaka is like the Obama administration who fought like hell to allow small children in the US to work as farm laborers around livestock, chemicals, dangerous tools without any restrictions or protections.

This is the barbaric phase of capitalism so there are deranged organizations bankrolled by corporations who claim unionizing will give children workers dignity & bargaining power. There are other organizations hiding behind a veneer of feminism who talk about scavenging as empowering work for women. In October 2015, the World Bank, in an extravagant, over-the-top act of largesse, raised the international poverty level from $1.25 (£1.02) to $1.90 (£1.50). They didn’t explain why they based the increase on the 2011 price index. (Either the World Bank hires the dumbest economists in the world or the most venal.) That increase must have been so gratifying to the empowerment & child union freaks since in Dhaka one can earn $1.00 (£0.99) to $1.90 (£1.50) for a 12-hour day of scavenging. That puts them over the phony-assed poverty line.

What a monstrous deceit. Why should those impoverished by economic plunder have to pick through rot & manure to earn a living? Why instead can’t societies able to destroy humanity by pushing a button develop sophisticated waste management systems?

Promoting scavenging as a respectable way to earn a living is as detestable as promoting sweatshop economics or prostitution as empowering for women & children. Social institutions on the take may draw their political cues from corporations but not those who believe in equality & human rights. Above all, in this era of post-truth truthiness we should never lose the capacity to recognize exploitation or be willing to accept the commodification of human life.