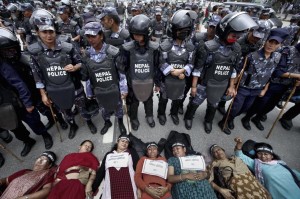 Nepalese women have been organizing & protesting for several months with conferences, whistle rallies, human chains, street debates, & now a sleep protest demanding that women’s rights be incorporated fully into the new constitution. The new constitution was a provision in the 2006 peace accord that ended the civil war in Nepal & was intended to transition Nepal from monarchy to a republic.

Chief among the objections of women activists to the proposed charter is abridgment of reproductive rights, denial of property & inheritance rights to women, & the reversal of a 2006 law that says children are eligible for citizenship as long as one parent is Nepalese. The new charter bars single parents from passing on their citizenship to their children & requires both parents be Nepalese. This would leave a million people stateless, disproportionately affecting women who are the vast majority of single parents in Nepal. Dalit women have been organizing also to incorporate their particular demands to end caste oppression & to assure their inclusion in Nepalese social & political life.

The Constituent Assembly formed to come up with a new charter failed the 2012 deadline because there was so much contention over the process of writing up a new charter–not just contention over inclusion of women, castes, & Indigenous peoples in the process, but over using the new charter to eliminate all the structural inequalities for women, & the 103 caste & ethnic groups in Nepal.

In principle, the charter process was supposed to be inclusive of all these groups but wouldn’t you know the process got preempted by “senior party leaders” who made final decisions outside the formal process. Plenary debates didn’t take place, public consultations & hearings never happened, & the democratic process was flouted. If women’s rights are denied in the new charter, you can be damn sure caste & ethnic rights also are.

Nepal might have bounced its monarch but its capitalist class is still fully in charge & invested up to its eyeballs in the neoliberal economy. All the contention around the new charter is really a brokering of irreconcilable conflicting class interests. The rights of women, castes, & ethnic groups are at odds with neoliberal sweatshop economics. That’s what all the maneuvering is about. There have already been sharp conflicts between the regime & primarily Dalit residents of slums in Kathmandu–when to further gentrification & development of upscale shopping malls, resorts, casinos, the regime moved in bulldozers to level the housing.
The charter disputes over the federal structure of Nepal at closer examination will likely be over how the oligarchs think they can best manage a neoliberal economy.

Photo is women activists protesting in Kathmandu; many of the riot cops are also female. Policing oppression may be the only place women are given some rights.