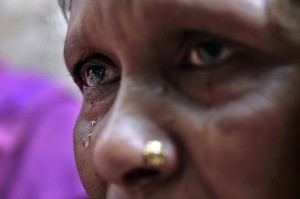 This Bangladeshi woman is at the protest outside the Tazreen Fashions factory in Savar, outside Dhaka, demanding compensation for the beloved family member she lost. We aren’t told who it was. It could have been a child since many of the 117 victims were child workers. Many victims too charred for identification were dumped in a mass grave & DNA forensics were not done–leaving many families to grieve without resolution.

Neoliberalism, the barbaric phase of capitalism, is indifferent to the human suffering it creates & that’s why it’s gotta go. It isn’t suited for human society. Giving it the boot won’t be easy but the quicker we do it the sooner we can begin to build a world fit for human beings to live & love in. That’s the bottom line.

Sweatshops are one of the odious features of the system but homelessness, mass starvation, contaminated food & water, global warming, forced immigration, plunder are all of a piece. We need to get our act together & clean this mess up.