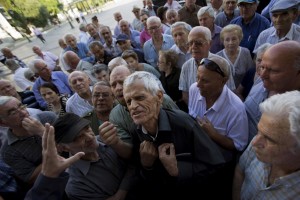 The Greek economic crisis is a classic elaboration of how neoliberal capitalism works–or rather how it doesn’t work, even on paper. What kind of system is it where banks lend billions to pay the interest on old debts? That’s “robbing Peter to pay Paul” writ large & hardly sound economics. You don’t have to be a sophisticated economist to see the folly of that because it operates exactly like every usurious title & payday loan chop shop.

Capitalism may be irrational but it is complex & operates differently in different countries, under different circumstances. Some capitalist countries are run by feudal monarchs; some by military juntas; others by flatulent parliaments. Some have strong labor & civil liberties traditions; under many regimes these are violently repressed. Rebellion against austerity policies in Europe is breaking out in southern Europe, in Greece, Spain, Portugal, Italy which are considered weaker economies relative to northern Europe.

Greece doesn’t seem the strongest country to resist neoliberalism except for its strong political & radical traditions, including in the fight against fascism. The importance of Greek working people in Cold War politics was not missed by the CIA which collaborated with Greek generals. The weakness of the labor movement in Greece today is a result of the military coup in 1967 which ruled until 1974 & repressed labor organization & civil liberties but did not destroy working class defiance.

We can really get a window into how capitalism operates by looking at Greece. SYRIZA is negotiating with the Troika but they are not in full control of Greece. Not by a long shot. That’s why they advisedly called a referendum to strengthen their position in negotiations, thereby gaining the authority of a popular mandate. There are contending political figures & parties in Greece; there are bankers & corporations. There is a capitalist class who will not lose their shirts & their gravy train to upstart politicians & dissident workers without a fight. That’s why they have a military which can intervene to save Greek oligarchy. Not unlike the military in Egypt.

Greece isn’t the first country to experience the trauma of debt bondage.The hundreds of thousands of refugees & immigrants traveling north from south Asia, the Middle East, Africa, from the Americas are driven by the whip of neoliberal austerity & dispossession going back to the 1980s & only become more ruthless with time. Healthcare, education, social security, housing, employment have been decimated for millions of people.

Neoliberal capitalism is spiraling into a global crisis; the system is out of control & ‘all the king’s horses & all the king’s men’ can’t put this monstrosity back together again. It’s an irrational system held together by periodic bloodletting in war & by outright theft legitimized in law. You can formulate laws to make plunder legal but you can’t formulate laws to make the system work. Immense wealth for an itsy-bitsy number of people is maintained at the expense of millions of working people; those who come out on the short end are called excess population. Social hatred, eugenics, & ethnic conflict are essential to this system.

Well Greek working people have put their foot down & this is good news around the globe because they have more organized power to resist than workers in many other countries. Those further north (including in the US) who think they’re sitting pretty today fortified against all that impoverishment can think again. There’s a tsunami moving north because neoliberalism, the barbaric phase of capitalism, just can’t help itself. The oligarchs are not moving backwards in history through feudalism to slavery–they’re going straight to slavery. Until we draw the line & stop them.

This photo is Greek pensioners being shut out by the banks which claim the till is empty without bail out money. Our fullest respect & solidarity with Greek working people–because the Greek people can’t stand their ground alone.