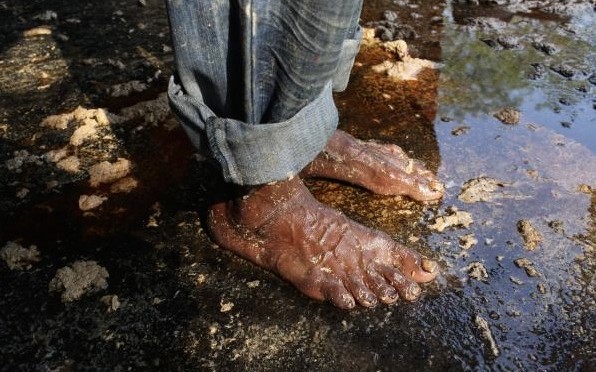 As a result of colonial occupation, the Indian economy has peculiarities which left-wing & right-wing economic historians explain quite differently. The right-wing ones have a harder go of it since capitalism works as little on paper as it does in reality. The introduction of neoliberal economic policies in the 1980s is credited with making India the 8th largest economy in the world, according to one method for measuring a country’s economy, & 3rd largest economy using another standard. This only means capitalism has no idea how the hell it works. But the one thing neoliberal policies have made entirely clear is that it doesn’t work for the majority of people. It doesn’t work at all for working people & it’s proven a disaster for the environment & human health.

The rivers (including the Ganges considered sacred to Hindus) which millions of people depend on for livelihoods are black & choked with domestic & industrial waste; plant & animal life are endangered; human health is imperiled with all manner of infections & respiratory diseases; farmlands are made toxic & produce poisonous vegetables. One Indian environmentalist called the country “an environmental basket-case, marked by polluted skies, dead rivers, falling water-tables, ever-increasing amounts of untreated wastes, disappearing forests.”

Many claim this situation is due to governmental inefficiencies, corruption, & inadequate regulations. That would go without saying since many of the industrial barons are directly part of the political establishment or act through political parties on the take. But it is also the very nature of neoliberal economic policies which contaminate everything in the interests of private profit & leave only carnage in their wake. This is not particular to India.

There are several industries in India that illustrate this state of affairs but perhaps none so egregiously as the leather tanning industry in Kanpur in the state of Uttar Pradesh & one of the largest industrial cities in India with 2.5 million residents. Kanpur has over 300 tanneries, making it India’s leading leather exporter with more than 90% for the US & European markets.

Tannery chimneys belch out a steady toxic potpourri of chemicals & particulates, giving a huge number of Kanpur residents some form of respiratory ailment. With no safety equipment for tannery workers (including children), a toxicology study found they had double the morbidity of others from exposure to carcinogenic & toxic chemicals used in the tanning process & leather dust which has high levels of chrominum which is highly toxic to humans.

It’s estimated only 20% of the poisonous water efflux from tanneries is treated. That’s likely a generous estimate. According to the report of one environmental group, the only treatment plant doesn’t function & contaminated efflux is discharged directly into local sewers, into farmlands used for agricultural purposes, & directly into the Ganges River.

Piling carnage upon carnage, the tanneries simply discard leather trimmings on the banks of the Ganges where children play or they dump them at a site on the outskirts of the city to be burned, dried, & re-used as fertilizer & chicken feed.

India has an active environmental movement comprised not only of scientists & student activists but of those people directly affected by the ruthless profiteering at their expense, including farmers, small town residents, antinuclear votaries. Many have likely been educated in political environmentalism by the Bhopal justice movement begun when a US corporation (Union Carbide, now Dow Chemical) tried to walk away from a 1984 accident that left human & environmental disaster in its wake. They await justice which has been repeatedly thwarted in US & Indian courts.

This tannery worker is standing barefoot in an area used for collecting dyes & toxic efflux from tanneries. Nothing speaks so cogently to neoliberalism’s complete disregard for human health & contempt for human life.