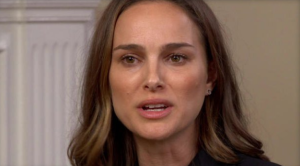 The actress Natalie Portman is being castigated by Israeli politicians for snubbing the 2018 Genesis prize, called the Jewish Nobel by ideologues but which is only a few years old & is one of Netanyahu’s stunts to legitimize Israel. Some have called Portman an enemy of the Jewish state, some call for her citizenship to be revoked, some say her rejection borders on anti-Semitism, others portray her as a dupe of Hamas & claim her snub is backhanded compliance with the cultural boycott of Israel by Palestinian supporters.

Portman is in fact a committed Zionist who assisted uber-Zionist Alan Dershovitz at Harvard in writing “A Case for Israel” & who has received Israeli funding for her films. No one familiar with her support for Israel would ever think her rejection of the Genesis thing was associated with BDS. She is a Zionist but she is not without principles when it comes to bombing & shooting unarmed Palestinians–unlike many other Zionist celebrities like the deceased Elie Wiesel. That’s why a false distinction is made between rightwing Zionists & liberal Zionists who both want a Jewish-only state. But the latter naively think there can be a Jewish-only state without apartheid & genocide of Palestinians. Portman has essentially the same position as Noam Chomsky, Norman Finkelstein, & J Street, including opposition to BDS.

The Zionist furor against Portman refusing the Genesis exposes the almost cult-like character of Zionism. No criticisms of Israeli policies are allowed, unquestioning loyalty is required & vituperations & shunning are the consequence of breaching those taboos. But the furor also exposes the uncertainty of Israeli leaders so that such ideological control is exacted from Zionist supporters. If you are not obsequiously for everything Netanyahu does, then you are an enemy of the Israeli state. More significantly, the uproar exposes the impact & the threat felt from the growing influence of BDS. In 2005, when Palestinian organizations put out the call for a cultural & economic boycott of Israel as a peaceful means to force Israel to end apartheid & genocide, they could hardly have imagined the political impact it would have. It has strengthened & provides a way for everyone to support Palestinian solidarity, even if you can’t attend a rally.

As an ardent Zionist, Portman probably feels blindsided by the backlash against her decision to reject the award. But she is very unlikely to reconsider her support for Israel & a Jewish-only state. Nevertheless, her stand against Israeli violence & the occupation confirms the claims of Palestinians & can be used to build BDS whether she wants it to or not. That is why Israeli politicians are ballistic over her snub. One can admire Portman for her stand regardless of her Zionism but she remains part of the problem. In contrast to Dershowitz & others who cheer the occupation & the bombing of Gaza, she believes Palestinians are human beings & should not be bombed or shot down in cold blood but she will not face that Israel by its very nature requires genocide & that her liberal “humane” Zionism offers cover for that reality.