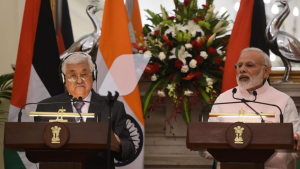 Hard to measure which of these two characters is the most despicable: Indian Prime Minister Narendra Modi or Palestinian president ad infinitum Mahmoud Abbas.

During this visit by Abbas to India, Modi (who will be visiting Israel in July) said Indian support for a Palestinian bantustate is unwavering & that “The relationship between India & Palestine is built on the foundation of longstanding solidarity & friendship since the days of our own freedom struggle”.

President ad infinitum Abbas expressed appreciation for the absolutely worthless expression of solidarity, saying, “India is a friend. It has influence at the international level. India can play an important role in resolving the Palestine-Israel crisis”. As if that wasn’t groveling enough, Abbas condemned terrorism in all its forms.

In fact, for the past 25 years India & Israel have maintained extensive economic & military ties worth billions of dollars. Those military ties include Israeli weapons used against India’s own dissidents & against Kashmiris & a contract for Israel to train paramilitary forces in Kashmir in the kind of violent methods they use against Palestinians.

This is a lowlife betrayal of Palestinian Intifada by President ad infinitum Abbas & a slap in the face to Kashmiri Intifada. He hasn’t run for office in the West Bank since 2009 because odds are he’d be thrown out on his ass. His sole function has been to implement the Oslo Accords which are the terms for surrendering self-determination never agreed to by the Palestinian people.