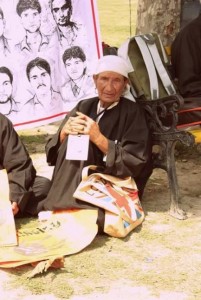 Mother’s Day is a time to pay tribute to the tens of thousands of mothers around the world whose children have been disappeared, tortured, murdered for taking an active stand against injustice & oppression. In country after country today, from Mexico to Kashmir, mothers & families of the disappeared organize to provide support to families & demand answers from the oppressive regimes that ripped their children away.

Those mothers never go away even after decades as they continue to pressure the regimes for such monstrous crimes. Photographic montages of the disappeared are a universal feature of their resistance which are still displayed decades later of the disappeared under Franco’s regime in Spain, the dictatorship in Argentina, the genocides in Honduras, Guatemala, Sri Lanka. Those photo montages stand as a symbol that the disappeared, through their families, will haunt justice until it is served.

The protester in the top photo is Jana Begum, a Kashmiri mother & activist in the Association of Parents of Disappeared Persons (APDP) in Indian-occupied Kashmir. APDP was founded by Parveena Ahangar after the disappearance of her 17-year-old son, Javaid Ahmad, in 1990. There are an estimated 8 to 10,000 Kashmiris disappeared under the Indian military occupation.

Our deepest respect to these mothers & activists & our fullest solidarity.