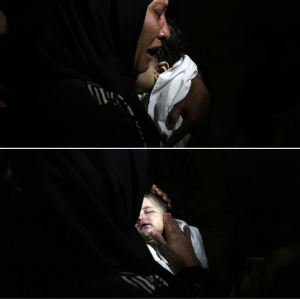 These deeply poignant photos are the mother of baby Laila Al-Ghandour, the 8-month-old infant who died of tear gas suffocation at the Great Return March. The Zionist vilification machine has moved into action attempting to deflect the massacre of unarmed civilian protesters by Israeli snipers into a Hamas provocation. Instead of firing rockets into Israel, Hamas is now urging Palestinians to throw themselves against the apartheid barrier that makes Gaza a penitentiary. There are never new lows in Zionism’s racist attacks on Palestinians. To stand steadfast in defense of Palestinians, think of this mother’s grief in the face of those monstrous lies.

Now there are voices protesting because Palestinians brought their children to the march. It isn’t just that genocide denies childhood to Palestinians. But who would have expected, even of genocidal Israel, that snipers would stand across the barrier & mow down unarmed protesters, including children, medics, journalists?

Stand with Palestinians by building the economic & cultural boycott. Check every label to make sure its country of origin is not Israel.

(Photo by Mohammed Zannoun via Activestills)