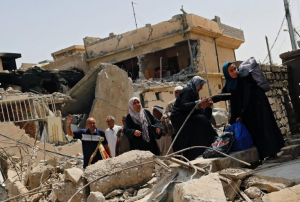 Iraqi civilians are scrambling over shifting rubble to flee US airstrikes & crossfire between ISIS fighters & Iraqi troops. See how US emancipation works? To liberate Mosul from an estimated 500 remaining ISIS fighters, the US drops bombs in concert with Iraqi army ground operations heedless of civilian safety.

When operations to take west Mosul from ISIS began February 19th, there were 750,000 civilians living there. It is a city, not a military installation, so inevitably the targets are residential areas, mosques, markets, train stations & inevitably the victims are civilians.

Reports conflict about the number of civilians killed & it’s not sure what the estimates are based on. Airwars reports that the civilian death toll has been massive & just in the first week of the siege an Iraqi army source estimated 3,864 civilians were killed. How could it not be massive when as of March 31st, the US coalition had carried out 11,554 airstrikes in Iraq trying to take out ISIS? After reports that hundreds of civilians were bombed to death, US & Iraqi military officials claim they were unaware civilians were living in the houses. Do they think the people of west Mosul keep livestock or maybe rockets in their homes? Like Israel claimed Hamas stored rockets in hospitals & homes when they bombed Gaza to smithereens in 2014?

It’s been difficult to judge the scale of the diaspora since media coverage about Mosul is down to a trickle but yesterday the UN coordinator for Iraq reported that nearly 700,000 have fled Mosul since the siege against ISIS began last October, including 500,000 from west Mosul alone. That means there are at least 250,000 civilians remaining in the area subject to air & ground missile bombardment.

The UN official also reported that refugee camps for the Mosul diaspora now shelter 326,000 people with space for another 42,000. Construction of other camps is underway to shelter 39,000 more people but the US $985 million appeal for Iraq humanitarian is less than 30 percent funded. Even if all the available spaces are filled & the new camps built, that would still leave 300,000 refugees with no place to live. And after the tents are built, what about medical care, food, water, toilets, schools, mosques? How long will they live in those camps? Will they ever be able to return to their homes or will it all be rubble like Gaza & Aleppo?

Thousands of the displaced, including children & the elderly, are fleeing with untreated injuries, some with infectious diseases, some with special needs, all with war trauma. Did the US coalition & Iraqi regime consider any of this when they began bombing Mosul to smithereens? How does such an apocalypse get classified as a liberation?

The only principled antiwar demand is for the immediate, unconditional withdrawal of US coalition forces from Iraq & Syria. Stop the bombing. Out now.