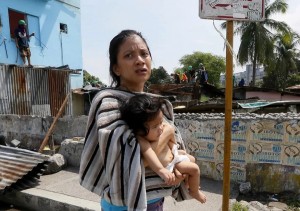 This woman & child have just been evicted from a shanty town in Quezon City, a ritzy district of Manila, Philippines, while a government demolition squad razes it to the ground. Over the past several years, there have been several slum demolitions in Quezon City & in several other sections of Manila–all of them rendering hundreds of families homeless without providing alternative housing. The government just as often uses bulldozers as it does torching the slums to drive residents out.

Every year, 240,000 displaced rural residents (displaced by land grabs in the IMF model of agribusiness plantations) move to Manila, making it the fastest growing city in the world. The World Bank reports squatters now comprise 40% of 12 million Manila residents. They are mostly unemployed or part of the informal economy & live on US$1.00 a day or less.

Quezon City–identified in 2008 as the richest city in the Philippines–has embarked on a massive infrastructure program including business parks, IT & call centers, high-priced condos, shopping malls, & other projects designed to attract foreign investment. Shanty towns will not be allowed to stand in the way of that.

The battles in Quezon City go back years with appeals by residents to the Commission on Human Rights, to the Manila Development Authority (which authorizes demolition squads), & attempts to get the Quezon city council to declare moratoriums on evictions until there are enough relocation sites–mind you, not provision of public housing for evictees, but empty lots where they can move. But the aggressive, often violent, evictions continue, including riot cops with water cannons & other assaultive weapons against unarmed residents, including elderly & children. Residents have always mounted fierce resistance & have pelted the demolition crews, bulldozers, & riot cops with bottles, rocks, & plastic bags with poop & urine.

The Philippines is a highly militarized society, in concert with the US Pentagon. It receives millions of dollars in US military aid & holds annual joint military exercises with the US. The US & Filipino antiwar movements have a joint demand: “Money for housing, not for war!”