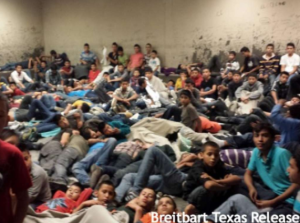 Media is reporting the suffocation death of 10 undocumented immigrants from Mexico abandoned in the rear of a tractor trailer rig in San Antonio, Texas about 238 miles (383 km) north of the US-Mexico border. Thirty-nine people, including children, were stuffed into the trailer without air-conditioning or air holes, food or water with outdoor heats near 100 degrees Fahrenheit (38 Celsius). At that level of outside heat, temperatures in enclosed vehicles can rise to 175 degrees Fahrenheit (79 Celsius) or higher in such overcrowded conditions. All of the survivors are being treated in hospital.

This is not the first such incidence on the border. In May 2003, in comparable intense heats, 74 people from Mexico & Central America were trapped in a tractor trailer near Victoria, Texas about 175 miles (282 kms) north of the border. Nineteen men, women, & children (a 5-year-old boy & four teens) died of asphyxiation, hyperthermia, & dehydration after the driver abandoned the rig when he heard screams of the refugees.

In the Victoria case, 14 defendants were prosecuted, including the driver. They certainly should have been. But there are questions about how the drivers got truckloads of human beings past the border patrol stations with K-9 dog units on the border & on the highways leading north.

Media is already beating the drums about prosecuting the driver who has been arrested & about the criminality of human trafficking. That’s a switch & bait tactic to draw attention away from US immigration policy that must be indicted for criminal disregard of human rights. People who can cross the border with dignity would not resort to human traffickers or submit to such inhuman conditions. Were it not for US economic policies in Mexico & Central America or neoliberal scorched earth policies, men, women, & children would not be forced to come to the US for work.

This photo is an immigrant detention center in the Rio Grande Valley on the border, with men, women, & children stuffed like sardines into a concrete room with no chairs, beds, or any attempt to treat them as human beings rather than livestock.

No human being is alien to us. Immigration is a human right. Open the damn borders.