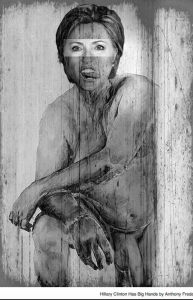 There is an onslaught against feminism & against women coming from both the right & the left. Everyone rightly goes up in arms when Drumpf spews his vulgar misogyny but when some woman-hating bozo with progressive politics produces crap like this, we are supposed to rise up in horror at any abridgments of his civil liberties & defend this trash as satiric evisceration of Clinton’s patriarchal & imperialist politics.

If you don’t viscerally & intellectually get what is hateful toward women in these images of Clinton, if you actually believe these are satiric takedowns of the patriarchy rather than debased attempts to diminish women in positions of power, you only illustrate how imperative the need for women’s political power.

By women’s political power I do not mean the election of Clinton or other contemptible or compromised female politicians. I mean the massive growth of feminism, the struggle for women’s rights, & that scary specter of identity politics which will not have feminism mansplained to us by so-called progressive women haters.

I post these detestable images only to illustrate, not to have them spread all over FB to titillate the haters. The vile thing on the left titled “Hillary Clinton has big hands” by Anthony Freda, was considered a mockery of Drumpf’s small hands which led him to publicly discuss the size of his penis. But why was Clinton parodied rather than Drumpf? The vile thing on the right portraying Clinton as a stripper is a photo of a mural in Melbourne, Australia posted to Instagram by the lowbrow artist named Lushsux which caused his account to be shut down. He needs his ass kicked too.