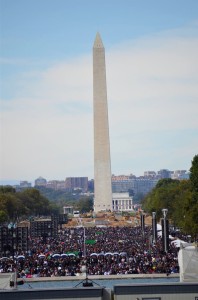 Anybody see a report on this march in Washington, DC, last Saturday? Me neither. Tens of thousands of Black activists marched on the 20th anniversary of the first Million Man March on October 10, 1995 & media coverage was scant.

The first march in 1995, called by minister Louis Farrakhan, was conservative in political thrust & had more to do with the morality of Black men who were asked to pledge to renounce violence, abstain from intoxicants, & build Black businesses & social institutions. The problem was that it reinforced stereotypes about the Black community that justified martial law, SWAT team policing, & the war on Black youth.

An estimated 850,000 Blacks showed up in Washington, & not just men, but women activists & teens responding to the violence against their communities around the US. Whatever the conservative intent of the organizers, it was a massive show of Black power.

Serendipitously, the O.J. Simpson verdict was rendered on October 3rd, 1995–an innocent verdict that stunned mostly white people across the US. His guilt or innocence is not important here. The verdict ignited a media onslaught against Blacks declaring the irreconcilable polarity of Blacks & whites in the US. Many whites, whose racism was previously chastened by the Civil Rights & Black Power Movements of the 1960s, began to speak openly of their hatred & distrust for Blacks. Since the US remains largely segregated, they were expressing profound ignorance & prejudice gleaned from TV, film, & other media representations.

And then, the Million Man March took place, just one week after the Simpson verdict. The cacophony of emboldened racism in media & among many whites stopped on a dime. Such is the daunting affect of Black power!

Photos of the 2015 march show young activists in Black Lives Matter (BLM) hoodies. A new generation of activists is emerging. While many parse the BLM movement looking for its political achilles heel, experienced activists know building a movement is a process of mistakes, fumbles, misdirections. What alone matters is organizing the commitment of the Black community to defend itself & its youth & to build the political structures of Black power.

A salute to Black political power!