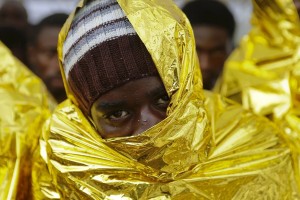 The EU-sponsored military operation–ostensibly against human traffickers from Libya but actually to stop immigration from African countries–is a real hush-hush affair. Nothing is being reported about it even though the EU officially sought a mandate from the UN for aggressive military action to search & destroy trafficker’s boats, to conduct military operations within Libya’s territorial waters, ports & harbors. There was no explanation of how the navies would distinguish fishing boats from those carrying immigrants or if they would torpedo boats carrying immigrants just to stop the traffickers.

What was the UN’s decision? Or are they still mulling it over? We do know there are European navies operating in the Mediterranean, including from Ireland, Italy, & England. What are they doing out there? We know they’ve been engaged in some rescue operations, even though immigrants are still drowning. This young man was reportedly rescued “near Libya” with 300 other people by an Italian coastguard ship & is waiting here to disembark in Messina, Sicily. Does that mean EU navies are indeed operating within Libyan territorial waters?

We’re also told five men were charged with multiple counts of murder by Italian authorities last week after being identified as the traffickers in charge of a boat that capsized, killing an estimated 200 people. Why does Italy have jurisdiction? And with European naval ships chock-a-block in the Mediterranean along with helicopters & high-tech surveillance systems, why weren’t they able to rescue those people?

The story’s not adding up; huge elements are being left out. And refugees & immigrants, including infants, children, elderly, infirm, & sick continue to suffer European Union barbarism. Why keep us in the dark if they’re not up to no good!?